NFC POS: What you need to know about it

Many of you would have probably heard about the term “NFC” already. Chances are, you have even used applications of this technology in your daily lives without knowing. NFC stands for Near Field Communication, and is a type of wireless communication technology that simplifies our way of life – how we make payments, exchange virtual content and connect our devices, just to name a few. [1] 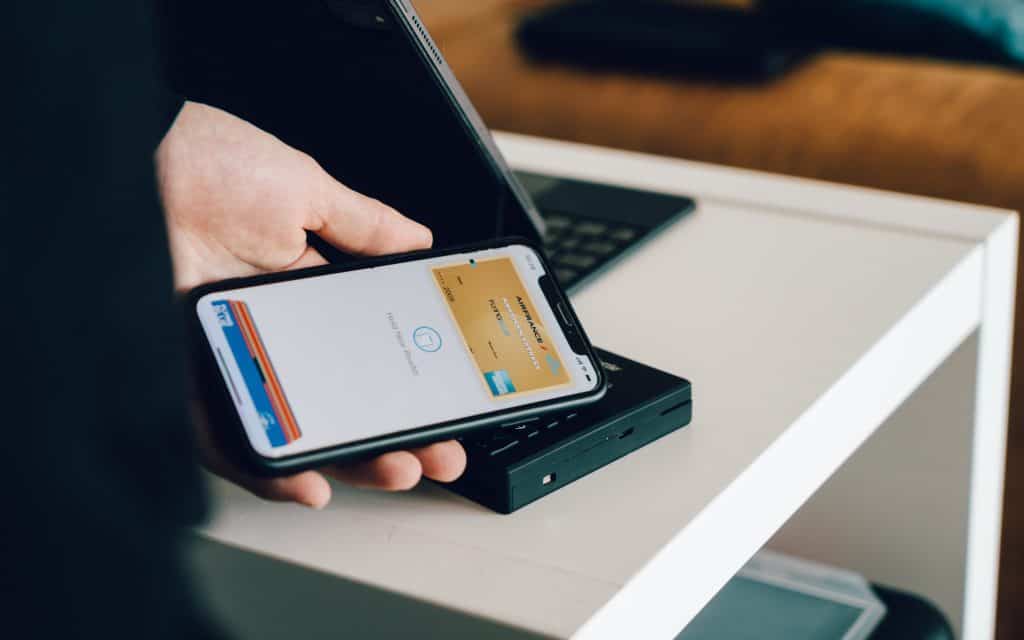 An example of NFC Payment, photo by CardMapr on Upsplash

NFC technology has revolutionized the way people interact with each other and with businesses. With quality of life applications such as data exchange between devices, contactless payments, transport cards and more. [2] NFC technology is also a prerequisite for users to make softPos payments. Let us take a quick look at the history of this technology and how it works.

How does NFC work?

Although NFC is considered a relatively new technology, it is not accurate to say that it is a radical technology. To be precise, NFC is actually just an evolution of radio-frequency identification (RFID). RFID is a wireless technology that usually involves three elements – a reader, a receiver and a database.

The reader usually contains antennas that give off radio waves and are able to receive signals from the RFID tags. In turn, the RFID tags emit radio waves that contain identifying information, which will be conveyed to the reader and referenced against the database upon their interaction. [3]

RFID technology only supports one-way communication, which means that a device can only be either a reader that executes tasks or a tag that carries information. However, NFC is an improvement to its predecessor and allows for two-way communications, and supports more features such as file transfers that take place between two NFC enabled devices.

NFC devices communicate with each other similarly to RFID – through radio waves that are emitted by the antenna that is either embedded inside the battery of smartphone devices or on the back of the device. There are two types of NFC devices: active and passive. Active NFC devices refer to devices that have their own power supply such as smartphones, tablets or payment terminals. On the other hand, passive NFC devices refer to devices that do not require any power supply and are activated from the electromagnetic fields of active devices. Such examples include payment cards or NFC tags.

For NFC interactions to take place, at least one device has to be an active device. In the case of peer-to-peer communications, two devices are active devices that will interact by generating radio waves alternately. The first device emits radio waves containing information while the second device simply listens and receives the information. Afterwards, the second device will emit radio waves and the first device will listen.

NFC technology only works in extremely close proximity. To be precise, the devices have to be within about just 4cm of each other. Although this may seem like something inconvenient, it is actually a pro of using NFC payment methods. Due to this close range, it brings a higher level of security to your digital payments as it is extremely difficult for thieves to steal your card information or intercept your payment transaction since they have to be that close to you as well.

As the article mentioned, NFC technology was actually built on RFID technology. In 2002, Sony Corporation and Royal Philips Electronics came together to develop and co-invent NFC technology officially. A year later, they received approval by the International Organization for Standardization (ISO) and International Electrotechnical Commission (IEC). [4]

Subsequently,  they formed the NFC Forum in 2004, which serves to facilitate the adoption and standardization of NFC technology to ensure interoperability between devices and services. [5] The forum aims to allow organizations to develop and roll out their own NFC technologies, and ensures that these technologies are in compliance with their regulations.

Is NFC the same as Bluetooth and Wifi?

Although they do bear similarities, NFC technology has distinct differences between itself and Bluetooth or Wi-Fi. An obvious difference that can be instantly determined is their transmission range. As we now know, NFC transmissions occur over extremely short ranges by design. However, Bluetooth can cover distances from up to 100 meters.

Another difference would be the convenience and accessibility of NFC as compared to Bluetooth. With NFC enabled devices, simply putting the two devices within range of each other is sufficient to facilitate the transaction. However, with Bluetooth, you have to go through the trouble to turn on your device’s Bluetooth, and subsequently search for and pair the other device in order to start your transaction.

However, a similarity would be that the two devices have extremely low file transferring speeds. The Bluetooth device has a networking speed of over 2 Mbps, while the NFC has a speed of merely 400 kbps. However, this design is intentional as the purpose of NFC is not for file transmission. This brings a benefit to NFC devices – as with their short range and low speed, they do not require powerful radios and will hence consume very little power, which is not taxing on the smartphone or tablet’s battery.

NFC is extremely flexible and this allows us to apply the technology in a multitude of ways. The most simple, straightforward and well known application of this would definitely be the NFC embedded smart card that customers can use to make contactless payments for their purchases. The physical card, including debit card or credit card can simply be waved or tapped onto a payment device or payment terminal such as POS terminals. With such convenience, it is no surprise that NFC-enabled cards are becoming one of the most popular methods to make card payments.

The technology also allows for payment using smartphones directly – widely known as e-wallets. This cashless payment system that exploits an NFC embedded mobile device has been increasingly popular due to the convenience and simplicity that it provides to its users. People no longer need to bring their big and bulky wallets out to shop anymore, but can simply just whip out their mobile wallet and pay with a quick wave or tap to a receiving device in proximity.

With more companies adopting NFC-enabled POS terminals, digital wallets are becoming more and more well received in the payments industry. In addition to this, big players are also developing their own method of mobile payments such as Google Pay and Apple Pay, and also mobile wallet applications like Google Wallet.

NFC can also be integrated into the world of doctors and healthcare. With the help of some software applications, doctors and nurses can benefit from this technology by linking their NFC embedded mobile phones to the hospital databases. This allows them to perform their daily tasks quicker and with more accuracy. Things like checking in, making payments, prescribing medication or checking of schedules and timetables are made quicker with a quick scan to a patient’s wrist tag. This improves efficiency and effectiveness, especially when trying to gain access to medical charts of a patient. To an industry where a few seconds can be the difference between life and death, such an application of NFC technology is definitely revolutionary.

Some other applications could also include smart ticketing, reward programs, customer engagement, security features, keyless access for hotels or homes, manufacturing, inventory management, shipping and logistics and many more. The applications of NFC technology are only limited by our imagination, and there are many more possibilities to what benefits they can bring to us.

With the advancement of NFC technology, end users definitely require modern and elegant hardware solutions that can cater to the ever-evolving needs of merchants and the limitless applications of software. iMin provides a full range of android NFC-enabled device and all-in-one device that can definitely help your business and leave you with happier customers. Interested to find out more? Click here.

Leave us a message and find your perfect POS solution.